The Will To Achieve:

"The only thing that is broken in my community is the will to achieve."
T. Willard Fair, Co-Director; President and CEO of The Urban League of Greater Miami

The Will to Achieve: A K-12 Education Surge Policy is a comprehensive national education reform proposal. It will enable all students to crack the code and break the barriers to academic achievement.

The Will to Achieve is intuitive, non-ideological, and parent-centered.  It consists of only four initiatives; yet it has the power to revitalize American education. It is a "surge policy" which can rapidly launch wave after wave of human talent with a "can do" spirit that will enable all our children develop the will to achieve.  Educational stagnation will yield only to such united and protracted efforts of parents, educators, policy-makers, academics, entrepreneurs, family members, and community leaders.

Our pilot project is with 13 schools within the Miami community of Liberty City.  Working with Miami Dade County Public Schools, the first stage of implementation began with the 2016-2017 school year.  Planning has started on the second stage which will launch in the 2017-2018 school year.

Our four initiatives are: (1) comprehensible standards that all parents can understand and support; (2) smart and open assessment; (3) personalized instruction through mobile technology; and (4) new models of the schoolhouse where needed.

Imagine a K-12 national educational system based on...

Four and only four initiatives to reform K-12 education The Will to Achieve 20161105.pdf (9 pages, downloadable PDF)

A graphic novel introducing The Will to Achieve. 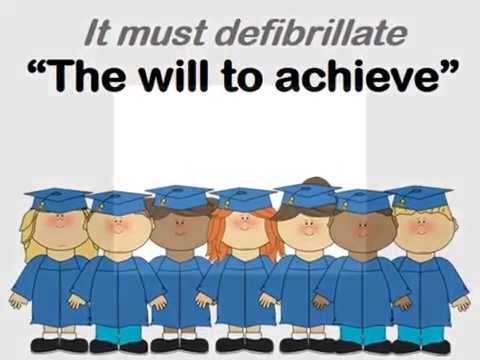 The Will to Achieve was launched at the start of the 2016-2017 school year in the Miami community of Liberty City.  It is supported by the "We Rise!" coalition of 50+ local organizations that was assembled by the Urban League of Greater Miami.  Miami Dade County Public Schools is a partnering group and thirteen of its schools are participating.  The goal is to transform an at-risk neighborhood into the "Liberty City Educational Village."

In the first phase of The Will to Achieve, 2016-2017, coalition partners are delivering a unified message emphasizing the importance of the parental role in education.  Numerous housing, infrastructure, and educational grants have been obtained.  In cooperation with community leaders, waivers from the Florida Department of Education are being explored to provide standards, assessments, and learning opportunities that meet the needs of Liberty City's children.

Dr. Dorothy Bendross-Minidngall is the first African-American woman elected Vice Chair for the Miami-Dade County School Board. She currently serves as Vice Chair of the Miami-Dade County School Board District 2, where she continues to serve as an example of a strong, courageous, tenacious leader whose thorough collaboration and commitment advocates on the behalf of those who might otherwise not be heard.

Alberto M. Carvalho has served as Superintendent of Miami-Dade County Public Schools, the nation’s fourth largest school system, since September 2008. He is a nationally recognized expert on education transformation, finance, and leadership development. During his tenure, M-DCPS has become one of the nation’s highest-performing urban school systems receiving systemwide accreditation from AdvancEd in 2014. The District has also been named as the 2014 College Board Advanced Placement Equity and Excellence District of the Year, as well as the 2012 winner of the Broad Prize for Urban Education. As a staunch believer in school choice, he has expanded choice options in Miami-Dade to include over 500 offerings including programs in fine and performing arts, biotechnology, engineering, robotics, aviation, forensic sciences, and many others. T. Willard Fair has been the President and CEO of the National Urban League of Greater Miami for over 50 years. He is transforming the Miami community of Liberty City into an "educational village" powered by a coalition of over 50 local organizations.

Dr. Monte Joffee co-founded The Renaissance Charter School in New York City and served as its principal for 14 years after teaching elementary school for 25 years. He currently is an adjunct instructor of education at Metropolitan College of New York.